Ok - there's no way I'm going to be able to keep up! I'm going to have to wait until this is over for the real story. I'm not sure who is still in the race, and how the times and results are going - there is so much to tell, but it's going to have to come later. I'll keep posting bits here and there for now.

Here's the total of what I had time to write yesterday (which btw was Tuesday the Thirteenth - an ominous bad luck day in Spain. (really, it's a Tuesday not a Friday here)):
--- 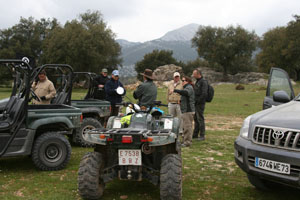 This had been quite the day... it seems that everything that could go wrong did. This morning the riders had to trailer 90km from Sanlucar de Barrameda to the starting point for the ride to Ronda. People got lost trying to find the starting pont, so the start was delayed quite a bit.

As I write this we're still at the stables and it's after 9pm, they're still trying to sort out rigs and trailers (all the ATV's and Rhinos need to be transported) and the trailers belonging to the broken down trucks need to be hooked to something. The ride briefing and another sponsor reception is at 10pm (it was supposed to be 8pm but everything has been delayed. 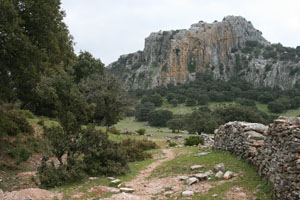 But - it was absolutely spectacular country - amazing scenery. I have a zillion photos to sort through. It never really rained, but the clouds followed us all day - nice and cool for the horses, otherwise it could have been an even longer day for the riders.
--

Now as I write, it's the following evening.. but I'll have to add to yesterday's summary, that the evening's reception, ride meeting and awards were held at the museum in Ronda - the Mondragon's Palace, known also as Palace of the Marquis of Villasierra - built in the 13th century, when Andalucia was still governed by the Moors (N. Africa & Arabian). The munincipality of Ronda opened the museum to Soto's group - for the pre ride briefing wine sampling, then upstairs for the ride briefing, the premios (awards) and finally the real reception back downwtairs in the main room of the old palace - complete with an incredible Morrocan garden (Chefchuan), old tiled ceilings and arches... beautiful. and perched on top of the cliffs. 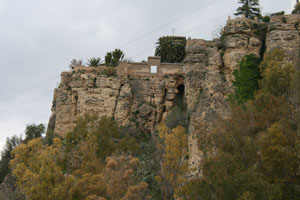 .Too dark to see the view - but the city of Ronda was built on top of a cliff, really - some of the older buildings blend perfectly from the stone and adobe to the natural cliff material - it's really incredible. There are still remnants from the Roman times, as well as Moors and later Castilians. I have lots of pictures, but none do the city justice. It is a spectacular old city full of history and beauty. 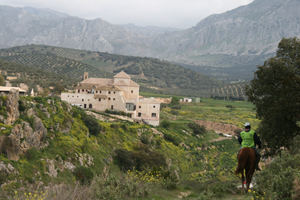 And today was another amazing day - I have lots of photos - again! - it was cold this morning and I hunkered in the van working on photos and stuff for much of the morning. The afternoon was very pleasant tho- I rode the trail with Soto and a camera crew in the Rhino - through wheat fields, and olive groves, and finally climbing up and over the hills into the valley of Antequera - the site of the Cathedral Saint Augustin, built in the 1500's, it was actually a monastery. A wonderful lunch (more food tonight) with local dishes, plenty of vino...

Tonight we have the ride briefing, another reception, cena (dinner)... good thing I'm getting more exercise these days!

p.s. it is now three hours later, I fell asleep with the computer in my lap, woke up some time later when Ines called to see if I was coming to the ride briefing and dinner... it took me at least ten minutes to just get one eye open. I decided that tonight I'm going to have to pass on the activities and get some sleep.
Posted by Endurance.Net at 14:34