From Grenada to the mountains (brrrr....) 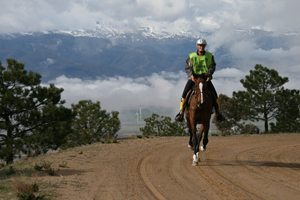 I'm finally warm and dry. Still listening to the rain fall outside. There was a news flash on the TV this afternoon about the heavy rains and flooding.

The morning was beautiful - though there was some creative navigation going on as people tried to find the place to start from today - and the start was a bit late. But spectacular!! The snow covered Sierra Nevada mountains were magnificent, windmills dotting the valley. 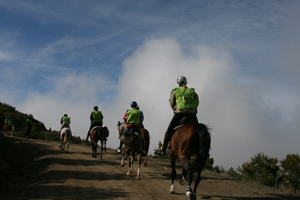 The sun was breaking through the clouds as the riders headed up into the hills - and in and outof the fog. The trail was entirely through a national park - high mountain pass of 9000 ft, still snow in places. 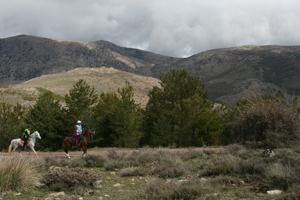 The hail was stinging the eyes making it hard to see. Antonio was driving with his face covered as much as possible. We got totally drenched, there were little snow drifts on our clothes, and the water pooled into the seats soaking our pants. Antonio's hands were clenched on the steering wheel and I could see the water streaming from his gloves. Every once in a while I could hear a grunt from the camera guys who were standing in the back of the Rhino - well actually they were hunkering down as best they could. Nothing like being in the driving rain and hail while going down the road at 30mph with no cover! I was scrunched down as best I could, but there's not a whole lot of option there... 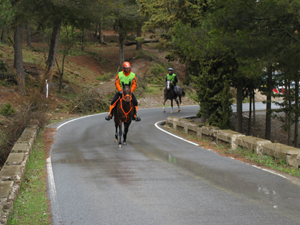 But - the horses did fantastic today! They all had a day of rest yesterday, and the looked really good, and fresh, this morning. Riders were happy. Cool wet weather isn't quite so bad for riding, and I think it was actually perfect for the horses as they could move along quite quickly. The riders didn't seem too miserable. The vets and timers and all were looking pretty wet and cold though.

The 'press core' (me, Susanna, Michael and Paula) rode back down the mountain with Xavier - in the car! Very wet, very cold, but this crazy guy is always making me laugh. He even put on some great latino music for us to listen to. 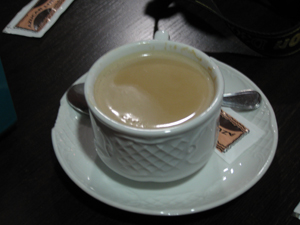 We stayed with a few of the front runners, but then it started raining again, so hard that it was impossible to take the cameras out. We followed an amazing old narrow road down to the finish, and just before we got there Paula spotted a cafe -'stop!' - and in we go for a cup of coffee while Xavier went on to the finish. The coffee so good, and so warm to hold in the hands that we each had two :)

So now we're outside the town of Guadix - the hotel is delightful, very charming and friendly and homey. And FAST WiFi! Meeting is at 8:30 - we'll get the scoop on tomorrow's ride which will finish in Cazorla - the finish for the entire event - in Cazorla. I can't believe how fast the time has gone. Meanwhile volcano's are erupting, Poland has lost it's government in a plane crash, Europe is stuck with no air travel. (I'm sort of hoping the ash drifts down south so I get stuck in Seville long enough for the annual Festival de Sevilla - a week of singing, dancing, horses.. I wouldn't mind catching a day or two of that!

Steph
Posted by Endurance.Net at 10:43