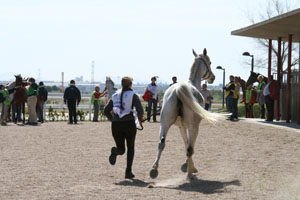 Wow... I left the north country of Idaho two days ago...I think I'm gettin' too old for all this travel. or maybe just not used to it anymore, or too soft or ... I had a long and convoluted flight from Boise to Denver to Frankfurt to Barcelona to Seville (gotta love those cheap ticket itineraries). Arrived by taxi at the hotel in Dos Hermanas (a town outside of Sevilla) around 9pm. Had dinner, a shower, checked email and fell asleep around midnight, fully expecting to head over to the hippodrome in the morning to check out preprations for the 5th running of the Raid Kaliber Tierras de Andalucia.

I slept deeply with many vivid and colorful dreams, vaguely remember a knock on the door (twice) from the housekeeper, and wondering why they would want to clean the room in the middle of the night! Finally I dragged myself over to the clock and it said 1:48 - I thought "wow I've only slept a couple hours (assuming it was 1:48 AM), I better try to get back to sleep".

I couldn't really sleep anymore, and figured oh well, time zone change, I'll get up and work some. I had a cold cup of coffee left over from the night before, and tried to focus on the computer screen. I thought there was a little light coming from under the curtain, maybe a bright street light from the hotel. Slowly it dawned (no pun intended) on me ... and I opened the curtain and was blasted by bright afternoon sunlight. OMG! I looked at the clock again and it was now 2:30 PM!! I had slept for 13 hours and didn't even realize it!

So... that sort of shot prospects for the day. It was late enough by the time I showered and fully woke up that it probably wasn't worth it to go over to the hippodrome where the ride would start and the horses were stabled. I arranged for a pickup from Ines in the morning (I would set the alarm tonight!!) and decided to spend the day catching up on email and work and then take a walk around town for a little exercise. 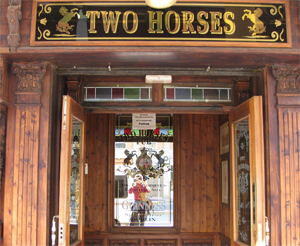 My espanol has never been that great, but it's coming back to me bit by bit. After an interesting conversation with the hotel clerk I settled on a walking route and spent an hour touring the neighborhood. Not a particularly charming area, mostly outer city streets, shops and neighborhoods. But it was warm and sunny and it felt good to get out.

Andalucia has a very long and fascinating history having been occupied over a long period of time by many different civilizations. It is a large region, actually an 'autonomous community of Spain', divided into eight provinces: Huelva, Seville, Cádiz, Córdoba, Málaga, Jaén, Granada and Almería, with Seville as the capital. The region has been occupied over the years by the Phoenicians, Greeks, Carthaginians then Romans, the Suevi, the Alani, the Vandals, the Visigoths, then the Moors, and finally the Castilian and Aragoneses who took it back for Spain in 1492. The Moors, people of Berber, Black African and Arab descent from North Africa, occupied southern Spain for nearly 8000 years, and had a profound affect on the region's architecture, food and culture. It was the North Africans who named it Al Andalus.

This ride - 600 kilometers in 10 days - is the dream of Jose Manuel Soto, a horseman, and one of Spain's cherished singers. The first running of the race was five years ago, and since then the course has changed somewhat, the goal always being to find beautiful and historic trails across the region. Jose has many contacts made over the years, and each stage of the event has some incredible village or cathedral or locality welcoming the riders with its own flavor of cerveza, vino and local foods and delicacies. Raid Kaliber Tierras de Andalucia is both a challenging race over varying terrain, and a cultural experience.

Tomorrow it begins - a ceremonial ride around the hippodrome, with all of the competitors taking several laps around the track (and this mileage will count as points towards the final standings!) to start the event.

Time for bed, and I WILL set my alarm tongiht.

Steph
Posted by Endurance.Net at 13:51