As we drove into basecamp Friday afternoon John commented that this was the third time we'd made this same 2 hour drive in the past couple weeks. Indeed - two weeks ago we came to the trail head a mile from camp for Don Perry's "Celebration of Life" memorial. A few days earlier we had gone to an outdoor reggae concert a few miles from camp... and this time we were here to stay for the weekend. Four horses to ride, 100 miles each if everything went well. 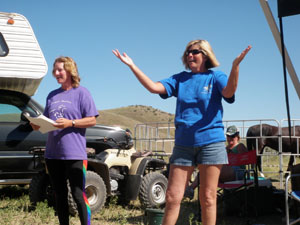 I've always like this ride - open rolling grasslands. It's been managed by several people over the years. I drove down for it from northern Idaho when it was the R&R, in 1992 - one of my very first rides on my very first crazy Arabian, Tiaro. Fast and fun as I recall! Pam Haynes managed it for years as the Purple Passion. Now Carrie Johnson and Trish Frahm have taken it over, and this year they decided to move it into June and hold a 2-Day ride. It was an Extremely well managed ride - so many thoughtful details went into every aspect of it - the maps, trail, water, awards - a lot of time and energy and work went into the ride. 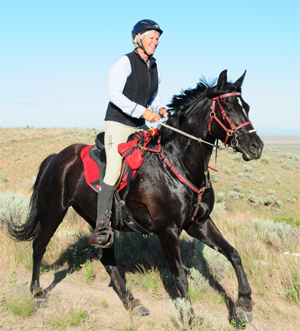 John came down with some sort of malady on Friday and wasn't feeling well - but managed to ride both days. He pretty much went to bed as soon as we got the trailer parked... and we weren't sure he was going to ride, but he toughed it out. We had four good rides over the weekend on four good horses. 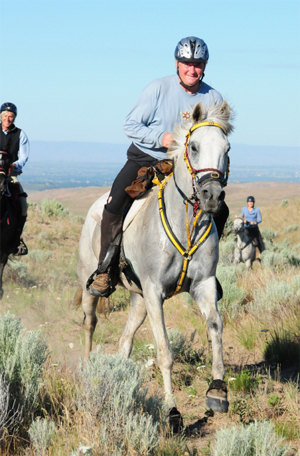 On the first day I rode my new black beast Ravenwood's Dark Desire aka Batman, John rode our Shagya mare Amara's Sonata aka Sunny, aka Robin when she goes out with Batman. Both were full of energy all day - and feeding off each other for a fast first loop. We slowed down during the day though as the hills got steeper and the sun got hotter. We still managed to top-ten which was a big surprise - but there were a few pulls and a couple off-trail, and it just worked out that way! Both horses did great. Dick Root and Jane Cunningham tied for first place, followed by Naomi Preston (who got BC on her mare Karlady) and Lee Pearce. 19 starters, 14 finishers. Day 2 (another 6AM start!!) John rode Rushcreek Mac and I rode Jaziret. Carol Brand rode with us all day on her (too cute) little mare Sooz. We had a great day! The horses got along well, were strong and happy, and we traded off leading and following. Jaziret has always been a good, brave lead horse. But after he discovered that those big holes out on there actually harbored vicious predating creatures he had a change of heart for a while. (I tried to get a close up photo along a grassy single track trail - of a badger who kept peeking out of his hole for a look at us - and once Jaziret discovered that all those big holes in the ground weren't empty he never looked at one the same again...) Sooz led for a while giving him a chance to regain his composure. Even Mac found some bravery on the trail and led for quite a while, always flicking an ear back to make sure it was really ok, but forging ahead quite willingly. It must have reminded him of the Nebraska grasslands back home. This was a gorgeous trail - we went through Eagle Canyon - it was too dark (too early!!) for my photos to come out, but it was pretty single track trail along the creek for several miles. It is full summer here now - thick green grass, wildflowers, locust trees in bloom, syringa, wild rose, cottonwoods - really beautiful. It was hot on both days, but on both days we had nice breezes to keep it comfortable. It was hot in camp, but perfect on the trails. And the trails were lovely. 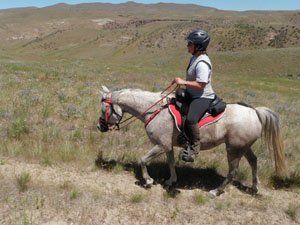 We top-tenned on the second day too! but... sadly this was because there were only nine starters on the 50. The LD was small too on the second day. Really a shame, its so much work to put on these rides, and you just never know how many riders you'll get, and if you get enough riders to pay for the vets, and the fees, and the awards, and the food... and all that stuff. I would do this 2-day ride again in a heartbeat, I really enjoyed it - but I'm not sure Trish and Carrie want to chance a financial loss again! Another successful boot day for our horses - we rode each horse 50 miles in Gloves (Easycare) and had only one problem (I lost a boot in a bog - but I had opted not to wrap that foot in tape before putting the boot on - just because I was feeling lazy). The tape makes all the difference in keeping the boots on. I was thinking during the ride that this would be a good trail for actually doing a loop or two barefoot instead of booted. Perfect footing for the most part. The horse's feet are getting tougher and more 'mustangy' in shape but they still have a way to go. I think once the new hoof grows out (the hoof growth since I pulled shoes and started trimming) the walls will be stronger, and I'm seeing an improvement in the hooves' concavity as well. Still learning... but also still committed to the barefoot journey. It is fascinating watching the feet change, and I'm loving the learning process. There are still a few frustrations with the boots, but each generation of boot design seems gets better - so I have faith~

Steph
Posted by Endurance.Net at 12:57