An endurance ride on Easter Island?? Leave it to EnduranceX to not only imagine doing this, but actually pull it together! 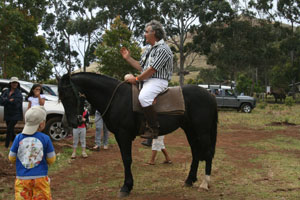 And wait, while he's at it - how about organizing the first Polo game on the island?? Luis Enrique Opazo Baltra, or Guyo as his friends call him, seems to have no limit to imagination, adventure and enthusiasm, and he has an amazing ability to share his wacky ideas with enough friends and sponsors to actually pull things off. His energy and spirit and love for adventure and horses is infectious.


Luis is retired from the Chilean military service - as a commandant, he led expeditions across Chile and other south American countries. He was equally capable on horseback, on motorbike, or as the commander of tank maneuvers. He has led numerous mounted expeditions into the Andes mountain range. And he has done almost everything a person can do with horses including jumping and professional polo. If I were to pick a handful of people that most embody the spirit of our sport - Luis would be one of them. He retired from the military ten years ago - and his vision for the next phase of his life was EnduranceX - a program, a business, an obsession - to organize endurance rides in the most spectacular and extreme places that can Chile had to offer. Patagonia - Torres del Paine, Tierra del Fuego, Atacama - the driest desert in the world with stunning scenery and unexpected wildlife. And why not Easter Island!? 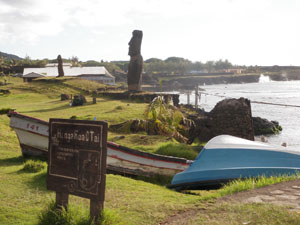 I honestly knew very little about Rapa Nui - this extremely remote inhabited island - but when Luis said he would help sponsor my trip there to cover the event, I didn't hesitate for a second. YES! I'll be there. I didn't know what to expect, having only heard of the place because of the ancient moia statues. But OMG what an amazing trip, what a most amazing place.


It felt like going back in time, to a more primitive and innocent place. Where an island culture which had developed over centuries, with NO influence from the outside world, still casts a spell over the island. There is no crime, everybody knows everybody, family ties are strong, friend and family support is strong. Somebody said there are only a couple guns on the whole island. (who would need a gun here?!). 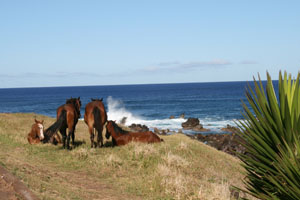 And the island is over-run with horses. While many residents consider them pests, for a horse-lover like me, it was an absolute visual delight!! Imagine spectacular scenery, the most amazing archeological richness conceivable, and the backdrop to all of this is the horse - the herds of horses - everywhere - grazing, playing, surviving. (that's a whole 'nuther story). The visual and spiritual effect was stunning.


Sun, wind, clouds, and the constant sight and sound of the sea keeps one feeling alive, and a part of the land. It is not a rich landscape - the constant wind has a drying effect on the vegetation, and the soil is is tenuous. The island is the top of a volcanic chain. The soil has formed from decaying vegetation, eroding lava rock, and volcanic ash. And in geological terms it hasn't had a lot of time to build its resume. There was a time when the island was mostly covered with trees - palm and other native species - but over the course of a dozen centuries of human habitation, the native flora and fauna were depleted. 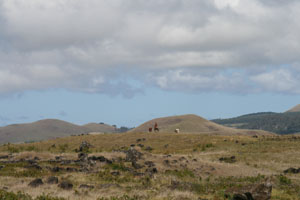 So the feeling one gets is of expanse - Dinah commented that 'this reminds me a little of Wyoming' - I laughed at that, but it does have the feel of the expansive and challenged grasslands. There are spots of terrestrial beauty - the volcanos and craters are astounding... but the real beauty and magic of the island is the constant coastline. Crashing waves, lava cliffs and juts of black and red stone rising out of the surf. There are only a few tiny beaches, protected areas that had time to form sand... most of the coast is rough and rugged surf. 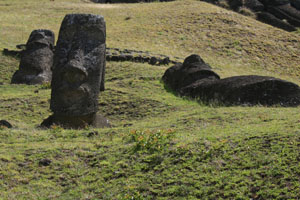 And EVERYWHERE one goes, one encounters the moai - the huge stone statues that were built to appease the gods and protect the villages. They are either standing (resurrected during the last several decades by various archeological teams) or lying face down where they where pulled over by warring tribes. (there's a movie out there 'Rapa Nui' produced by Kevin Costner which was a box office bomb, but has some good imagery of the island and it's history). Everywhere you go you see these amazing, and somehow poignant 'beings'. We started calling them 'guys'. Wow, look at those guys over there! Do you see that guy, poking up of the rubble? Look - isn't that guy cute? (yes, they did take on human traits).


So... an amazing and remote and beautiful place, and thus the object of EnduranceX obsession! This event was at least two years in the making - planning, mapping, visiting, exploring. One of the members of the EnduranceX team, Elizabeth Huyghe Rochette, is also an avid lover of Chile's natural beauty. When she is not working (she is an architect) she travels the country exploring, and writing books about, the natural wonders and National Parks. She had been to Easter Island numerous times before, researching and studying the island for one of her books. I suspect Elizabeth had a large role in inspiring this ride to happen. 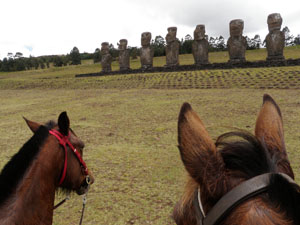 The ride: horses would not be an issue! Up until the last several years almost all transportation on the island was by horse. It is still a major mode of transportation, but the number of cars and motorcycles (which must all be shipped over from the mainland) is increasing. I was actually very impressed with the horses we were provided for the ride. They were well trained, and fairly fit. I totally fell in love with my horse 'poki' ! He was a little reluctant to leave his herd, but responded beautifully to a little shake from a leafy branch. Just a shake and leaf rattle that he could see and hear, and he was all business!


The trail: this was actually more of a challenge for the organizers since much of the island is a National Archeological Park (also a UNESCO World Heritage site) - so some of the most intriguing places to ride were off limits to a competitive event. But they managed to put together enough trail to make an interesting ride - along the coast, passing in front of one of the moia 'communities', through eucalyptus groves (an introduced tree), and along the outskirts of town. It was a fun trail to ride. 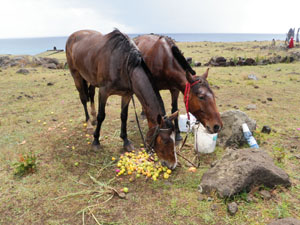 Though the islanders were as comfortable on a horse as one can be, they had never experienced an organized endurance race. Steve and I managed to win the thing, but really only because we knew what it took - keeping a steady pace, and being mindful of footing and opportunity for speed. And some of the others got caught up in the enthusiasm of the race, only to be eliminated at the finish. (but I think they still felt the glory of the win!).


And the thing I loved most about this ride was that our horses refueled at the vetchecks - not on hay, not on grain, not on supplements and electrolytes, but on mangos!! Mangos that our crew (Dinah and Christoph, a local who owned 'three hundred horses') actually picked from the wild mango plants that cover the coastal pastures... that was too cool! The other 'keeper' moment was when a few local kids happened to meet up with us on the trail, and joined in the fun challenging to a short race (a challenge Steve was happy to oblige!) - 3 kids on 2 horses with little or no tack, just velcro butts!

The event: Luis managed to pull off a 'real' endurance event. The venue had banners, tents, lined vetting areas, real vets, the whole deal! A great party the night before with food, wine and native dancers. And a fun awards ceremony after the ride, capped off with a traditional island asado (barbeque) in one of the many caves which open up onto the sea - crashing waves and all. Absolutely unique and special.

It was a totally amazing experience to be there. 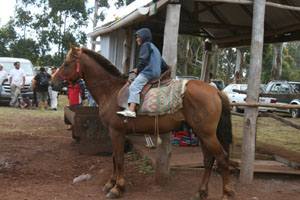 It was a blast to watch the polo match - polo friends of Luis had flown over and gamely squared off for an official polo match, to be played on island horses. Taped tails, elaborate headgear, polo saddles and pads, and they actually looked pretty good! From a non-polo onlooker's perspective they looked like the real thing. It was fun to see the islanders show up for the match too - some in cars, some on horseback. And many were employed as owners and trainers and grooms. Everybody had fun I think. 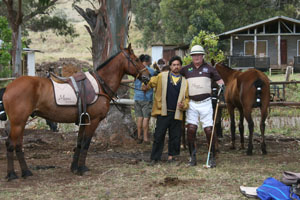 I really can't say enough about this whole EnduranceX thing - it is fun, spirited, beautiful, challenging, exotic, amazing... I don't know how he does it, but part of Luis' magic is his ability to find people - and sponsors (e.g. LAN - a major airline) to share in his vision and actually make these things happen.


I begged and pleaded for Luis to find a way to bring me to the next event in Atacama. This is a place I've always been fascinated by, ever since my uncle showed me slides (decades ago) from their journey by camper from Tucson to Tierra del Fuego, and back again. He showed slides of their passage through this desert land and it totally fueled my imagination. I've always wanted to see it - and maybe I'll get a chance.


Luis is planning on doing this ride sometime next year - probably June or early July (winter in S. America) - I'm leaving my calendar open!! I'm going to post more about this ride as info becomes available. My mission: bring a handful of people with me. Any takers out there?? (you can see photos of the last Atacama ride take by Pia